Now you can make this for a baby in your life! Turn it into a doll, or add the rattle for fun, and the hair serves as fun textures for little fingers to play with! Wow your friends with this fun baby shower gift!

Materials:
Hook size D – 3.25mm
Worsted weight yarns in the colors of your choice. I used yarns on the thinner side, due to the size of the hook, so a 3 might be best, but 4 would work too.
Used here:
Tail – Fairy Tale Knits hand dyed yarn, Triton colorway (her variegated yarns are absolutely perfect for mermaid tails!) – approximately 12 yrds
Skin – Vanna’s Choice, Beige – approximately 15 yrds
Hair – Red Heart Soft, Coral – approximately 35 yrds
Small amounts of worsted weight yarn in black for the eyes.
1.5 inch rattle insert (their smaller sized rattle would also work, just use extra stuffing!)
Small amount of polyester fiberfill for stuffing
Tapestry needle

Terms and abbreviations to know:
Magic ring
rnd, rnds – round, rounds
ch, chs – chain, chains
st, sts – stitch, stitches
sl st – slip stitch
sc – single crochet
hdc – half double crochet
BLO – back loop only
inc – increase, 2 sc together into the same st
dec – decrease, connect 2 sts into 1 sts
hdc2tog – half double crochet 2 together, a decrease using hdc
​inv – invisible
invsc2tog  – invisible single crochet 2 together; this is essentially a decrease, but done in such a way as to make the continuous stitching smoother and the decrease not as noticeable

Notes: This pattern begins at the bottom with the tail fin, working in rows, but switching to rnds after completing the fin. Chs do not count toward sts on the turns, and rnds are worked continuously, without joining. Arms and hair are made separately and sewn onto the body.

The pattern will switch here to working in rnds.
Rnd 1: ch 1 and turn, sc 5 across in FLO, then turn and sc 5 across in the unworked loops behind, do not join; 10 sts 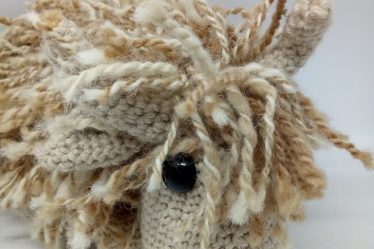